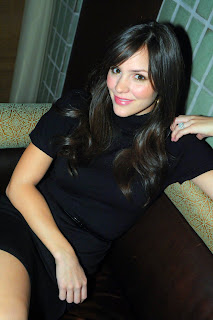 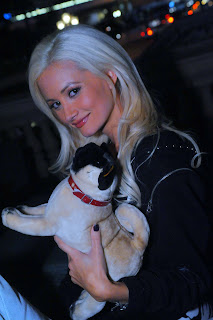 Katharine McPhee, songstress and American Idol runner up, treated her dancers to dinner at LAVO inside The Palazzo Tuesday evening. In town for a private show, the group dined on Chef Ludo’s Pizzette Margherita, Grilled Beef Kabob, Chicken Palliard and Chocolate Bread Pudding. After dinner they headed upstairs to a dance floor table in the nightclub.

Holly Madison, Hefner-ex and Girls Next Door reality star, spent an entire evening at LAVO beginning at 6 pm. She attended the opening of the Executive Lounge mixer at LAVO with George Maloof before the two sat for dinner in the restaurant. After enjoying Mediterranean Sea Bass and Caramelized Salmon, Holly and her stuffed animal pug puppy adjourned to meet a large group of friends who were seated on the hookah patio. Later in the evening motocross star Cary Hart joined everyone outside.

Spotted heading up to the nightclub were celebrity chefs Daniel Boulud and Paul Bartolotta. At a separate table upstairs was Ari Fleisher, former press secretary for President George W. Bush.
at 1:49 PM