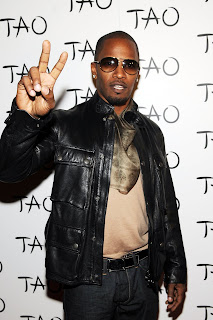 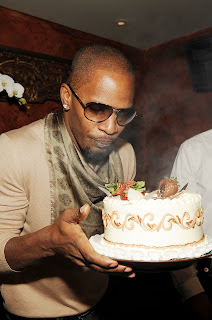 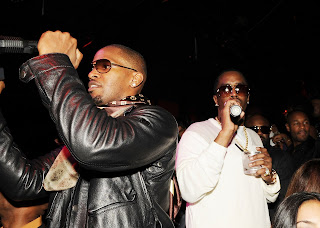 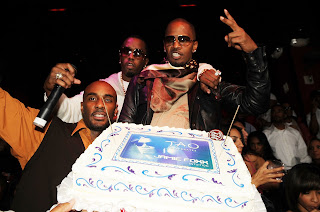 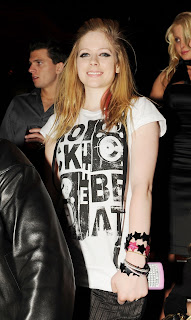 Saturday night TAO Las Vegas saw one of the biggest birthday bashes of the year as Academy Award-winning actor and Grammy-nominated singer Jamie Foxx celebrated his 41st birthday and the release of his new album Intuition. Jamie and his crew arrived at TAO ready to party as they were carrying bottles of Ciroc, given to them by music mogul Sean “Diddy” Combs. After posing for photographers on the TAO red carpet, Jamie and 22 of his close friends and family dined inside the restaurant’s private dining room and chose Chilean Sea Bass, lobster wontons and sushi among several dishes.
Towards the end of the dinner, the restaurant surprised Jamie with a sparkler presentation and a birthday cake. The entire group cheered and sang out “Happy Birthday.” Jamie then gave an emotional speech thanking each and everyone of his friends and family in the room. The Oscar winner even teared up as he thanked his sister (Deidra Dixon) and his childhood friends from Texas for always being there for him. After Jamie’s touching speech, the group headed upstairs to the nightclub where more of Jamie’s friends joined him to party at his usual VIP table on the dance floor. Feeling at home inside the nightclub, Foxx grabbed the mic and MC’d the night and sang songs from his new album. Revelers packed the dance floor when Sean “Diddy” Combs joined Jamie at his table. Diddy also grabbed a mic and made the entire club sing Jamie “happy birthday.” The club surprised Jamie with another sparkler presentation and birthday cake featuring his album cover.
Throughout the night, Diddy and Jamie went back and forth with DJ Vice singing along to Jamie’s album and some of Diddy’s own hits. Rolling in around 1:45 am was pop star Avril Lavigne. The singer arrived looking like a true pop star with her signature pink highlights and pink Coverse hi-tops. All pregnancy rumors were put to rest when she imbibed on shots of Patron at the owner’s table on the dance floor. Avril was in great spirits and was all smiles when Diddy gave her a shout out in the nightclub. Just a few tables were actors Chris Evans (“Fantastic Four”) and Lauren Conrad’s boyfriend actor Kyle Howard (TBS’s “My Boys).
Heres some video of the cake presentation with Sean "Diddy" Combs leading the crowd in singing HAPPY BIRTHDAY!
at 1:20 PM