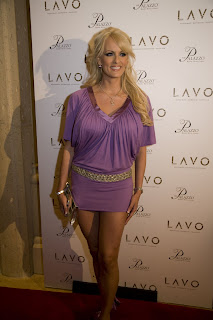 Stormy arrives on the carpet 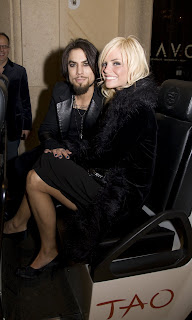 Dave Navarro and guest take the TAO/LAVO
custom golf cart to TAO after dinner at LAVO.

Friday at LAVO inside The Palazzo sexy rocker Dave Navarro, his stunning new girlfriend and a group of friends dined on specialties from the menu before climbing aboard the LAVO/TAO Escalade golf cart to head to TAO for his hosting duties there. Always gregarious, Navarro waved to fans and posed for pictures along the way. Also dining at the hot spot were R&B superstar John Legend, Wilmer Valderrama and Girl’s Gone Wild creator Joe Francis.

Upstairs in the nightclub adult film star Stormy Daniels hosted the night in celebration of her upcoming film release, “Operation Tropical Stormy.” Stormy arrived at 11 pm and headed directly to a table in the nightclub which was stocked with Champagne and Grey Goose. Joined by friends she posed for pictures with fans and danced the night away to the sounds of DJ Crooked, even hitting the DJ booth to give the packed club a shout out.

Following dinner Legend took a dancer floor table in the nightclub where he was joined by UFC fighter Quinton “Rampage” Jackson, while Valderamma chose a large corner booth overseeing the party. Also spotted at a table in the nightclub was actor Simon Rex with a group of friends including History of Violence actor Ashton Holmes, Anna Chudoba from the reality show Average Joe and Stu Stone, Jamie Kennedy’s rap partner.
at 5:12 PM