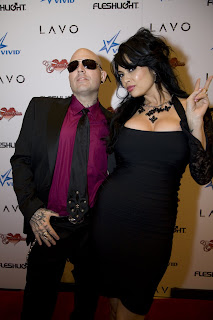 Saturday night at LAVO inside The Palazzo, Gary Dell’Abate, Baba Booey from The Howard Stern Show, dined in the restaurant before heading upstairs to the nightclub where he was serving as guest Emcee.

The host for the evening, Tera Patrick, headed straight to LAVO after the adult film awards, where she was inducted into the AVN Hall of Fame. She and husband Evan Seinfeld flirted on the red carpet before heading up to the nightclub with Dell’Abate to get the festivities started. Together they introduced the girls of Vivid and celebrated Adult Film Week.
at 3:25 PM