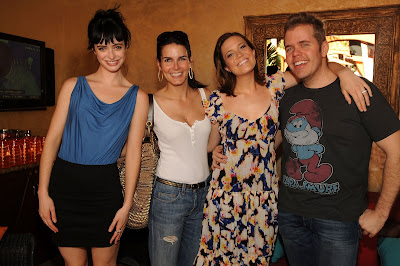 Actress Krysten Ritter, Actress Angie Harmon, Actress and Singer Mandy Moore and Perez Hilton get cozy in their TAO Beach cabana at the opening this past Saturday.... 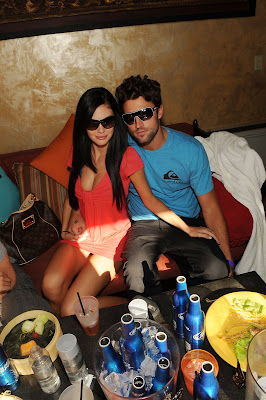 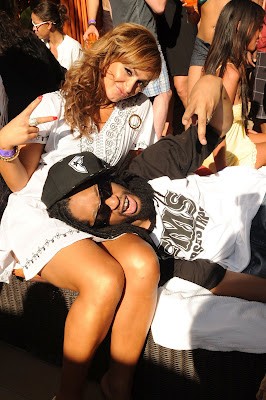 "Dancing With The Stars" Karina Smirnoff and Rapper Lil Jon.... 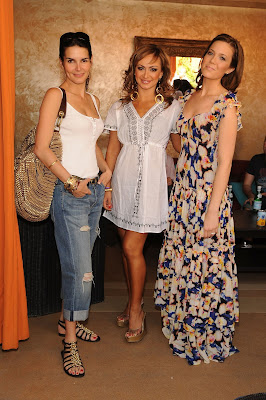 Once again, notable names spent their Vegas weekends with the TAO Group, taking in the TAO, TAO Beach and LAVO venues.

The dining room at LAVO was even more stunning Friday night when graced with the presence of several TV beauties. My Name is Earl’s Nadine Velazquez, who is in town to co-host the Miss USA contest, dined with a girlfriend over a bottle of red wine.

Nearby Karina Smirnoff of Dancing with the Stars and three friends enjoyed LAVO’s new Italian menu. Both groups of ladies journeyed upstairs to the nightclub for a bit of dancing post dinner to the sounds of DJ FIVE.

TAO Group partner Jason Strauss kicked off his 35th birthday weekend celebration with dinner at the Asian bistro, where he was joined by a large group of friends including America’s Next Top Model winner CariDee English and actress Taylor Quinn.

Also dining nearby with friends, actress Krysten Ritter, who has been tapped for the new Gossip Girl spinoff and at another table E!’s Ben Lyons and Catt Sadler.

All of the notable names hit the nightclub where DJ Reach was spinning.

Also enjoying the day was Owen Wilson, in town with his brother Andrew and a few friends, shading himself from the Vegas sun by wearing a long sleeve shirt and a baseball hat.

Angie Harmon, showing off a svelte post-baby figure, decided to spend the day with a girlfriend at TAO Beach while hubby Jason Sehorn golfed. Harmon surprised her husband with a Vegas trip to celebrate his 38th birthday, which was this past Wednesday.

Harmon was just one of the celebs that gossip blogger Perez Hilton met while he was at TAO Beach. Perez walked the carpet wearing a Papa Smurf t-shirt paired with silver and white Creative Recreation shoes that caught the eye of the photographers.

Actress Krysten Ritter, from Confessions of a Shopaholic and the upcoming Gossip Girl spinoff, arrived with music video director boyfriend Scott Culver. The affectionate couple lounged on a daybed inside a cabana near Dancing With the Stars pro Karina Smirnoff, whose Lily & Allen gauzy dress was ideal for the spring day.

Across the pool the party heated up inside a cabana where Lil Jon, Reggie Bush, Brody Jenner and his girlfriend Playmate Jayde Nicole had gathered along with poker pros Phil Hellmuth and Antonio Esfandiari. NFL pro Bush took photos with his girlfriend Kim Kardashian’s step-brother Jenner, but out of respect for Kim who was not in Vegas, wouldn’t take pictures with any other women.

After spending the day at TAO Beach, Angie Harmon rejoined her husband Jason Sehorn for an Italian dinner at LAVO to celebrate his 38th birthday. Joined by another couple, after dinner they headed up to the nightclub for Grey Goose cocktails and dancing to the sounds of DJ Skratchy.

Just two tables away in the nightclub were rapper Too Short and reality star Brody Jenner. Patron was the libation of choice there, with margaritas topped off by chilled Patron shots.

Over at TAO both The Veronicas and Nadine Velazquez came to dine right after wrapping up Miss USA rehearsals for the day. The Veronica’s enjoyed sushi under the watchful eye of TAO’s Buddha, while at a table nearby Velazquez and friends ate Dragon Rolls and sipped merlot. Also dining at TAO, Dancing with the Star’s Karina Smirnoff with three friends.

After dinner, The Veronica’s and Smirnoff stayed at TAO, for the nightclub there, while Nadine Velazquez and friends decided to return to LAVO’s nightclub for a second night in a row. The My Name is Earl Star stayed a short while before turning in early to rest up for her co-hosting duties at Miss USA Sunday.