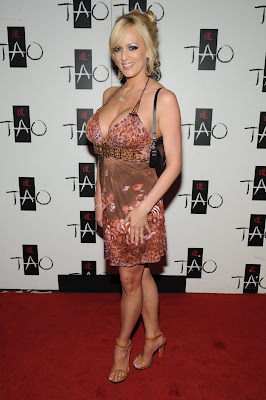 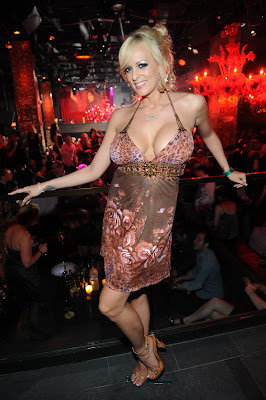 Saturday night Kid Rock dined with friends inside the private dining room at TAO Asian Bistro before heading upstairs to the new exclusive elevated VIP sky box overlooking the moat section and the entire club. Rock drank Jim Beam and Pepsi while enjoying cigars and as ladies clamored to get close to the rock star. DJ Vice unsuccessfully egged him on to come to the DJ booth to spin, but the entire group, which included comedians David Spade and Dana Carvey, did get up and dance any time Vice played a Kid Rock song.

Sitting at the next table over was the night’s host Stormy Daniels. The adult film star arrived directly from the industry awards party earlier in the evening. After walking the TAO red carpet Daniels was joined by friends and checked out the scene from her perch high in the club with a glass of Veuve Clicquot in hand.

Spotted earlier in the evening was the young Hollywood coupling of Jessica Lowndes and Aaron Paul. The 90210 beauty and the Breaking Bad actor were very affectionate throughout a dinner of TAO favorites.